Current developments around the further spread of the Corona virus have led us to the decision to cancel the Hays Forum Vienna on 05/03/2020 and postpone this until a later date.

We consider it part of our social responsibility to reduce potential transmission routes of this virus (SARS-CoV-2) and incorporated the recommendations of the Robert Koch Institute and the WHO into our considerations as to whether or not we should hold this year's Hays Forum. The recommended protective measures, which include maintaining a minimum safe distance, cannot be sufficiently guaranteed to be effective during such an event.

The decision to cancel the Forum is primarily for your own protection and that of those around you. We therefore ask for your understanding in this matter.

The Hays Forum is an event to which we invite selected customers. With the Hays Forum, we offer a platform for presenting and discussing key management issues where both before and after the lecture participants have the opportunity to chat and network with each other.

The topic for Hays Forum 2019 was "From Solo to Symphony – What Businesses Can Learn From Orchestras".

When the musicians in an orchestra are strategically and precisely in tune with each other, a unity of sound is achieved, which is fundamental for producing outstanding music. Despite the diversity of the individual musicians, unity must be achieved under the clear guidance of the conductor and his superiors.

This complex process, which sometimes involves up to 100 top executives and manifests itself in just a few rehearsals, can also inspire companies to question their own management culture and look at it from a new perspective. The interdisciplinary, cross-functional and lively interplay of forces is the decisive factor in achieving joint success in a concert. The artistic freedom of individuals is indispensable, but at the same time it must be directed towards attaining the goal of the entire ensemble.

In his talk, Christian Gansch explained how a team can be built from many soloists and how creative friction can create harmony by following the motto: "Listen to one another – act together".

Grammy winner Christian Gansch, highly regarded internationally as a conductor, producer and consultant, was born in Austria in 1960. His book "From Solo to Symphony - What businesses can learn from orchestras" was published in 2006, and he is a keynote speaker of the highest calibre.

From 1981 to 1990 Christian was leader of the Munich Philharmonic Orchestra. He then moved into the music industry and produced over 190 CDs worldwide with artists such as Pierre Boulez, Claudio Abbado and Anna Netrebko. Winner of four Grammys, amongst many other international awards, Christian lectures in German and English.
He was the recipient of the Record Academy Award Tokyo, for conductor in the category "Best Concerto Disc" for Beethoven's five piano concertos, and as a producer for Mahler's 8th Symphony with the Berlin Staatskapelle under the baton of Pierre Boulez.

With two distinct perspectives of the musical world, as a musician and as a manager, he has been able to create a unique coaching concept, which demonstrates the similarities between orchestras and company structures.
Gansch compares these similarities and demonstrates what companies can learn from the complex structures in orchestras, which outwardly look like a perfect unit to the audience. Orchestras with their high potential for human conflicts, leadership issues and complex integrated communications are a perfect example of how to bring a huge variety of specialists and instruments together to form one integrated harmonious unit. 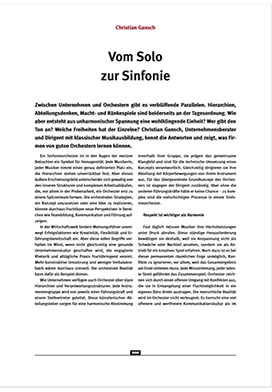