This is the association
Train of Hope

In 2015, a few helpers in Vienna joined forces under the name Train of Hope to provide first aid to those seeking protection at Vienna's main railway station. The association mainly used social media to organise direct help for refugees. Train of Hope was awarded the Human Rights Prize of the Austrian League for Human Rights for their extraordinary commitment. Due to the fact that the need for first aid at the main station decreased, the association decided to move the help to the places where the need arises.

When it became clear in February 2022 that many people from Ukraine would flee to Austria, the association made it its goal to also help these people in need. Within a very short time, a humanitarian arrival centre was set up in Vienna's 2nd district in cooperation with the City of Vienna, where, together with many helpers, more than 125,000 people have already been cared for.

Our social commitment at Train of Hope

In 2022, we started our involvement with the non-profit organisation Train of Hope as part of ‘Helping for your tomorrow’. Train of Hope is dedicated to helping refugees, currently especially those seeking protection from Ukraine. The focus is on distributing aid, counselling, networking and general support for refugees.

This is how we support Train of Hope

In the arrival centre for Ukrainian refugees at Engerthstraße 267, 1020 Vienna, there is a lot to do every day. In addition to providing refugees with all the necessities (food, clothing, etc.), care also plays a crucial role.

Our involvement with Train of Hope includes support at the arrival centre, which is enormously important for the people: 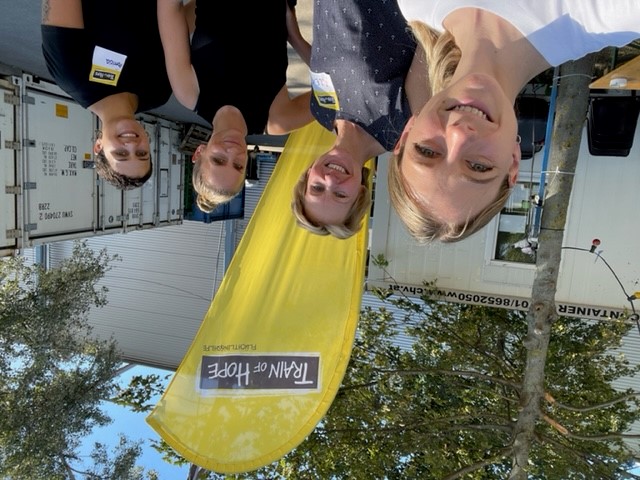 Excerpt from our volunteering days

Four colleagues spent an afternoon at the Train of Hope arrival centre for Ukrainian refugees. Even though the media coverage is slowly decreasing, the war is still present, and people are constantly arriving in Austria looking for help and a life in security.

Our colleagues there sorted donations, chatted with the refugees, picked out items of clothing such as bathing suits or shoes. What sounds like a very basic activity, is an essential for the refugees to satisfy their basic needs. The colleagues loved the experience and would recommend everyone to do the same. They found it particularly heart-warming that they heard the word ‘thank you’ very often - even if most of the refugees did not speak German.

This is how you can also support Train of Hope

There are three ways you can support Train of Hope: donate tangible assets, donate money, or donate your time to help on-site at the arrivals centre. Just have a look at the ToH website.

Find out more about ToH